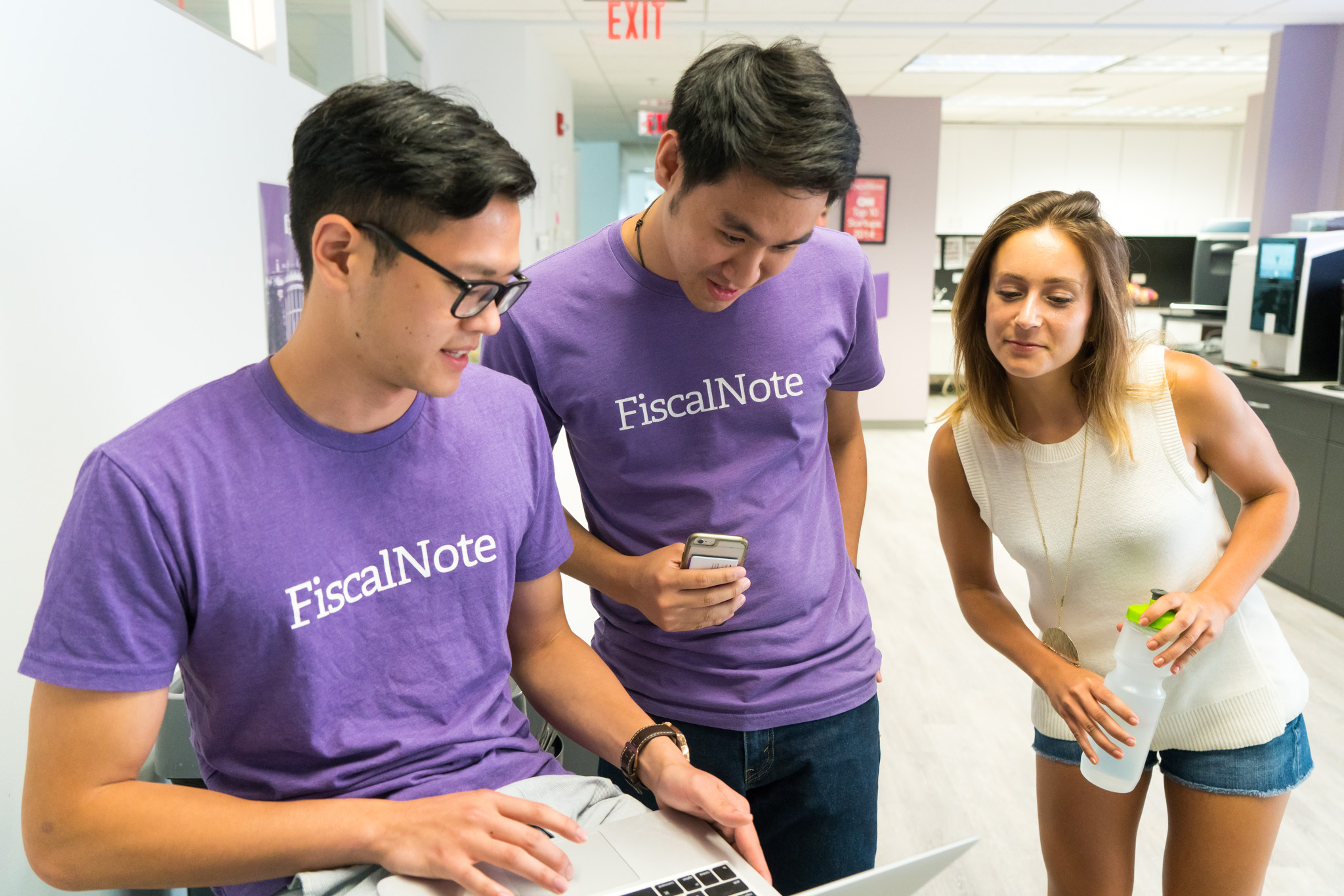 Let's face it, it's hard to give feedback that matters. Feedback that matters should help the receiver improve, but that kind of feedback is rare in many workplaces because it isn't given for fear of offending someone or feedback tends to only point out errors without offering pointers for improvement. This lack of honest feedback in turn leads to tension and lingering problems, a dysfunctional organization.

This is a phenomenon I noticed at FiscalNote back in Fall 2015 and one that resonated with others on the Product team. Early that year, we had launched a new product only to find it harder to sell than expected. Some people including myself had the feeling we had completely missed the mark only to find ourselves making incremental improvements with the hope that the next update would get us that product-market fit. We found ourselves skirting around the giant elephant in the room - the fact that we decided to build what was easy and not what solved new pain points for our customers - and lacked brutal honesty with each other. In these sorts of environments, it feels hard to hold each other accountable without hurting feelings and as a result, a lot of time gets wasted mulling over issues instead of taking action.

Coincidentally, I had recently finished reading Mindset: The New Psychology of Success when our lack of honest feedback with each other became a collective concern. Mindset became the basis for the solution I devised for the Product team. Since then, other teams at FiscalNote, including our Business Development and Policy teams have incorporated parts of it into their training. Now, I'm working with our Operations team to fit it into company-wide onboarding and training.

Giving feedback successfully and fostering a strong feedback culture hinges on one simple principle and the tactics that follow.

Principle: Everyone can adopt the growth mindset.

In other words, fixed mindset argues that people have a set of innate talents and abilities. In particular, this belief manifests itself in how people react to failures and setbacks. A fixed mindset reaction results in loss of self-esteem, self-denigration, pessimism, and a feeling of helplessness. Most importantly, this kind of reaction does not focus on the learning opportunity. Rather, it accepts failure wholly as a negative event. Consequently, the negative experience of failure is avoided by avoiding challenges with high risk and high reward. Finally, because growth tends to occur when taking challenges at the edge of one's comfort zone, fixed mindset individuals are less likely to grow over time.

The growth mindset, however, argues that people are constantly developing new skills and improving existing ones, forever pushing their own boundaries. Failures and setbacks are viewed differently from growth mindset compared to fixed mindset. It eschews the self-denigration and pessimism characterized by fixed mindset and frames failure as inability to do yet not ever. There is a stronger focus on the learning opportunity that comes from failure rather than the experience of doing poorly. It is about assessing what one could have done better and moving on, quickly. In this world of growth mindset, people are more likely to take risky challenges for they will either be rewarded with success or with a valuable lesson. In essence, challenges become win-win scenarios instead of win-loss.

Now, how does this apply to feedback? Well, if everyone gives and receives feedback with the principles of growth mindset in mind everyone wins. Therein lies the power of growth mindset. Once everyone at a company or team is familiar with growth mindset and actively embraces the growth mindset, critical feedback becomes viewed more as learning opportunities than attacks on one's performance or identity. When one person knows that the other person will readily take feedback as an opportunity to grow, then that person is more likely to give critical feedback that helps the other person grow. It puts everyone on the same page and promotes a common understanding of one another.

With that in mind, here are the three tactical ways of receiving and giving feedback.

This first tactic is very simple: Receive feedback with an open mind and restrain your instinct to get defensive. Try seeing through the perspective of the feedback giver and reach a common understanding by consolidating your perspective with the other. That will allow you to consider the feedback with clearer eyes.

The second tactic relates to giving the crucial, critical feedback we all need. The goal for giving critical feedback is to help someone do better in the future, so critical feedback should be specific, factual, and, most importantly, actionable. Feedback should be specific so that it is tangible to the receiver. It should be factual so that there is less room for opinions and conflicting thoughts. Lastly, it should be actionable so that the receiver can change future behaviour to be more conducive for success. For example, if a coworker is continually late to meetings, one can cite a number of specific meetings the coworker was late to, the fact that such tardiness cost X number of people a Y minutes which adds up X * Y / 60 man hours, and that in the future, the tardy person can schedule in travel time before a meeting so that he or she is not late again. That is a very simple example, but the premise applies across all situations.

We can't always be bombarded with just critical feedback. It has a mental toll, so this third tactic covers positive feedback - when something goes really well and you want to reinforce such behaviour and encourage growth from it. In these scenarios, you want to praise the work and strategy that led to a great result rather than the result itself. Praising the results leads towards expectations that could become crippling. Praising the result makes it seem not okay to fail, which goes against growth mindset theory.

A slide from the deck I use at FiscalNote summarizing the tactics behind Growth Feedback Framework. 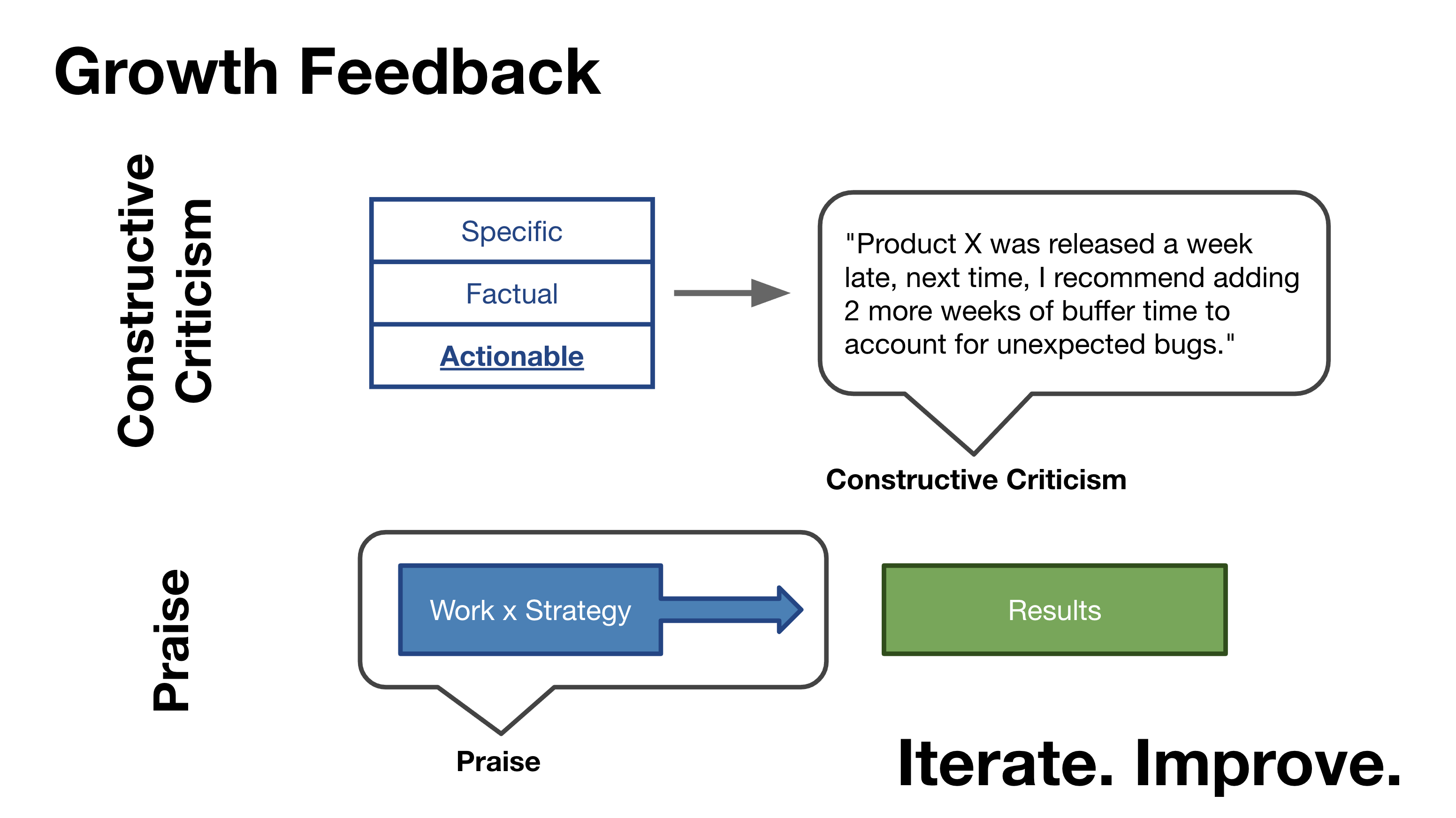 Everyone can embrace growth mindset

Receive feedback with an open mind, and don't get defensive.

When giving critical feedback, make sure it is factual and actionable.

When giving positive feedback, praise the process, not the results.